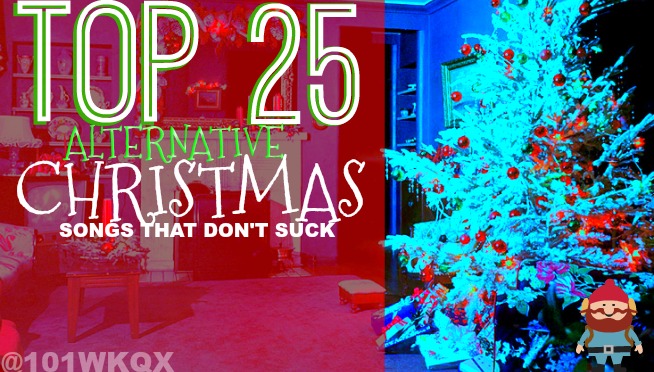 Christmas music can be extremely annoying with it’s sludging out of the PA system of every store your shopping in and the speakers of the relative you don’t like spending the holidays with. It can be overly sappy and corny to the point where it’s disingenuous, while others just warm your heart like a puppy snuggling in your lap while you’re sipping eggnog on the couch with a fire crackling as the gifts are wrapped and waiting for Christmas morning.

Alternative rock has taken it’s ironic swipe over the Christmas music catalog with cover songs and deranged demented tracks take their own snow-shoveled path. Here is my 25 choice cuts of alternative bands doing their own out-there spins on holiday music. Some are inventive covers of songs while others are their own unique deranged winter wonders.

Almost any track from the Tarquin Records All-Star Holiday Extravaganza album could have a place on this list (one more makes the cut by the way) but this organ driven comedy track talks about noteworthy NHL stars and what they are doing on the big holiday. The lyrics talk about Chicago Blackhawks great Jeremey Roenick getting a brand new bike, so you know it’s just fun.

This song from the ‘Taste of Christmas’ comp is a hard rocking goof about Santa somehow fighting the supernatural forces of evil and “seeking the purest of souls”. This not to be taken seriously but that’s the point.

This religous standard has been belted by high-voiced choir boys well before your Grandpa’s hair was grey but Rivers Cuomo and company give it this distorted emo take that adds a little head-bobbing rock feel. It comes from the 2008 EP ‘Christmas with Weezer’.

The video for this crowd-chorus rowdy sing-a-long plays almost like an episode of ‘It’s Always Sunny in (Boston)” with the Murphy’s showing off their dysfunctional family. If this was a soundtrack for a ‘Shameless’ holiday special it would also work.

Yes, this is real. It’s a cover that is superior to the original song that appeared on the 1980 Star Wars theme cash-grab ‘Christmas in the Stars’ album. This cover features the same computer blips and bloops but Dewan’s nerdy soulfulness over a reserved electric organ hits a sincere tone of love for the rebel droid who held the plans that helped take down the Death Star.

Nevada’s sweetest sons the Killers have been putting our Christmas songs almost every year since 2006 for charity, and this songs almost plays a storytelling jam you might on one of their regular albums but it talks of the child-like wonder of Christmas.

All we want for Christmas is an MCR reunion. Give this to me any day over the Mariah Carey version every year.

This cover of the Vandals is a bouncing gem from the early ‘Tragic Kingdom’ era of Orange County’s finest with a madcap video to boot.  Do you think Gwen Stefani will finally respond to my Christmas Cards since I put her band on this list?

Scott Lucs gives a charming take on a classic that lends itself to his vocal sneer that we’ve come to expect from him.

Pay attention to the darkly funny lyrics and don’t let your Granddad hear it.

A love song about being in the drunk tank around the holiday.

Willmete’s finest take this cut from Disney classic “A Nightmare Before Christmas” for a whirl and it gives all the chills of Jack Skeleton discovering that special feeling.

When this band regarded as one of the best alt acts in the last 10 years started their comeback in 2015, they got it going with this heart-wrenching breakup with the idea of Christmas itself.

This pogo-jumping take on the religious hymn will most likely be heard at any Christmas midnight mass, and that’s ok but it’s a refreshing interpretation that truly soars from these California punk legends.

You can almost hear the snow on this number from Duluth alt band Low who featured it on their 1999 holiday EP simply titled ‘Christmas’.

The most loveable weirdos to break out of the 80’s, TMBG were known for venturing into the novelty world of music with some of their album being made for children and while other tracks got animated send-ups on ‘Tiny Toon Adventures’. So of course, they had a killer song about a man being jealous of his wife flirting with Santa.

This candy pop tune with George Michael talking of a love lost, gets a bit of accoustic emo sickness from one of best alt bands of the 2000’s.

08.The Killers ‘ Joseph, Better You than Me’

Yes, the Killers make great alt xmas songs and this won’t be the last on the list. This collaboration with rock icon Elton John and Pet Shop Boy’s Neil Tennant is a soulful tribute to Joseph, the earthly fraternal figure who lead Jesus through life. Poor Joseph never got his due in song, but this one really plays out like a Billy Joel broadway smash.

Imagine if the animals at the Zoo had theire own wild party. Yeah, well Wayne Coyne and company made their delightful idea into a joyful song that is very easy to sing-a-long with.

A song the 80’s rap legends were initially hesitant to record for the charity compilation ‘A Very Special Christmas’ has grown into one of the catchiest holiday bangers of all time. Yeah, how many seasonal songs can you call a ‘banger’? The cornball story of the song is just as good sugary sweet as one of those cookies with green and red sprinkles on it.

Stevens has earned his following for his experimental commitment to big concepts with religious overtones but this playful song is a just more fun then running down the steps as a kid on Christmas morning.

The coolest punk band ever demands you hug it out this year.

The most popular hit from this new wave outfit talks about in the middle of the shopping rush running into the potential boyfriend. It’s got this early mixture of funk, rap, and disco that ages well.

This predecessor to pop punk cut sees the Rock and Roll Hall of Famers put a Robin Hood narrative to help us remember the less fortunate during the holidays in which the tough street kids demand that Father Christmas give them money and save the toys “for the little rich boys”. You know the song is good when you lose count of how many bands have covered it.

This dark twisted tale of a murderous avenger in Santa coming for a misbehaving Brandon Flowers plays out over a shimmy and shake musical ride. It’s certainly not a track to sing-a-long to with Grandma but it’s so weird but also reflects on the bleakness of holidays for those out there not doing well while also laughing at the ‘be good, get good stuff’ concept that we are told as kids. Just remember it’s a dark yet light hearted on the forced cherriness of the seasons, and not to be taken seriously.

Also this is Brandon’s mustache at the peak of odd weirdness.