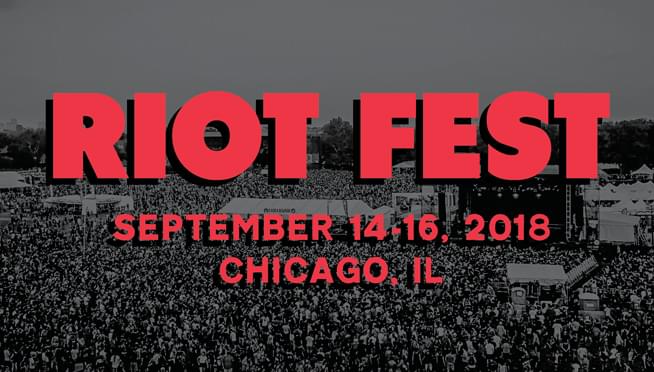 We are less than a week away from the carnival of alternative music delights in Douglas Park that is Riot Fest. After enduring a health related cancellation by Blink 182, the lineup has seen the fitting additions of Weezer, Run the Jewels, and Taking Back Sunday. You can enter to win 3-day passes here or find us around town this week with Dos Equis to win tickets in person.

Riot Fest has for years provided jump-off-the-ground good times. Wait, did I say ‘ground’ I meant mud. Yeah, if you are an RF veteran you have grimed up a few pair of shoes as the rain fell and we all continued to rock anyway.

Here are my top 10 Riot Fest performances that I have seen that you can not in anyway debate or challenge. They are in no order but I am more than certain that this list is better than anything you could come up with unless you want to prove it on Twitter or Facebook. Bring it, bruh!

Flaming Lips (2016): The Flaming LIps have never ceased in being wonderfully weird and playful with a show that is not bound by the stage. They have also brought the most striking visual presentation to RF with a shinny happy otherworldly ambiance. Yes, Wayne Coyne is performing inside a giant plastic ball.

Rancid (2013): Though they have played RF several times with stand out shows, this one stays with me as it was the last year in Humboldt Park and I got to have short walk home from the show with my clothes covered in mud, dancing up the sod, and clapping to ‘Ruby Soho’.

Faith No More (2015): This is one of those bucket list bands you have to see live if you appreciate truly ‘different’ music. They had been out of the limelight for many years after a few reunion runs in Europe and this was first time the MIke Pattoon-lead band which influenced a generation would play Chicago and man, did it deliver.

Me First & the Gimmes Gimmes ( 2014): This super-punk collective from NOFX and the Swinging Utters has been a delightful blender of American pop music with a smart-ass remix. They ooze fun basically as the ‘world’s biggest punk band covering songs your Mom who does not like punk would know.

Thursday (2017): The ‘screamo’ bands of the early 2000 owe a TON to Thursday. They were first band to sincerely place themselves as an inviting and inclusive band in the subgenre with real take on the post 9/11 world. Getting to hear ‘Signals Over The Air’ felt like soundtrack to all the personal crap I

The Original Misfit (2016): Seeing that familiar skull face on t-shirts for many years and hear those bro-chant-a-long songs about horror movies in Beverly basements, the Misfits just felt a figurative ghost that made music at one point. It was a real filling experience to see Glenn Danzig and Jerry Only bury the hatchet and slaughter it at RF.  This was easily most black t-shirts in one place at one time. It was just a raging good time.

Andrew WK: Note there is no specific year listed here, because the most positive-minded in music has become such a part of the Riot Fest ethos, he basically IS Riot Fest. His exuberant power of an audience is really lasting you can not walk away from his shows without a big sweaty smile on. Check out my interview with him from last year.

I mean the guy married someone on stage!

Andrew W.K. interpretively dances about all 16 tracks on his new album, 'You’re Not Alone’, out today. Check it out at www.riotfest.org/AWK#AndrewWKinterpretiveDanceParty

System of a Down (2015): Through the last 10 years or so, SOAD has been hesitant about making new music but their live shows still deliver the goods and this muddy set was no different. Their set had to be stopped possibly twice due to the wet post-rain ground being slippery for the moshing hordes.

Tenacious D (2015): Seeing the most prolific duo in comedy rock live was another long-pursued treasure here. They were just as funny and charismatic as they were in the ‘Pick of Destiny’ movie and their albums.

Nine Inch Nails (2017) : The dark engaging energy of NIN live is so profound. They connect all the savage emotional violence of their records into the live space, and dressed up with this awesome light show that pulled in thousands during their headlining set.