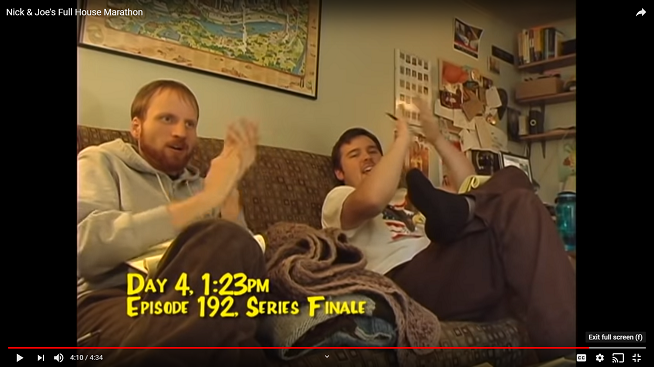 Nick and Joe of the long-running Found Footage Festival have made a career out of diving into the odd, the corny and the unknowingly bad parts of the VHS era of entertainment whether it be tapes people send into them on their weekly ‘VCR Party’ live streams or their touring show but in 2007 they kicked it up a notch. For an article that would eventually run in Entertainment Weekly, the Wisconsin video adventurers watched the entire original run of 90’s family sitcom ‘Full House’ in one sitting. They endured every cliche dad joke, every catchphrase from the Olsen twins, and awkward cameos from the Beach Boys. This video diary shows how they survived the entire harrowing ordeal.

They did this for 3 1/2 days?! They deserve some type of medal or award for this. Maybe they can be honorary members of Uncle Jesse and the Rippers?

How many times can you endure John Stamos saying “Have Mercy”?