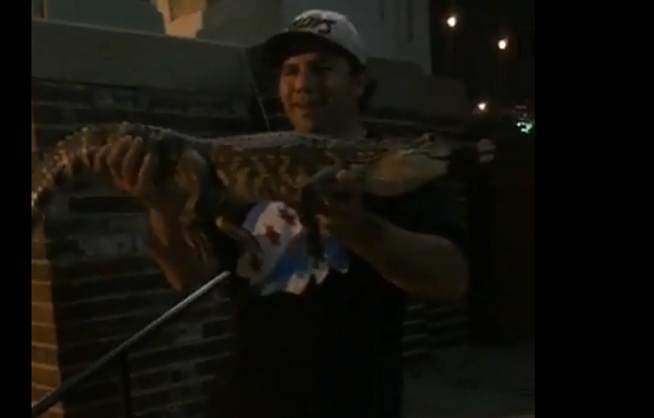 Just when you thought it was over, the most ridiculous yet intriguing Chicago story of the summer chomps back for another round.

Block Club Chicago reported earlier today on a possible new alligator that was found in the lagoon in Humboldt Park, the same area where the internet sensation ‘Chance the Snapper’ gained world-wide media attention after he avoided authorities for over a week in the surprising habitat earlier this month. He was eventually captured with much fanfare, and has been transferred to an accommodating facility in Florida. The latest gator to possibly crawl around the west side park has already been captured and taken into Chicago Police custody before being transferred to animal care professionals last night.

The new gator story is somewhat suspect though, as the fresh Facebook live videos covering the entire scenario as the whole scenario played out. The video goes on for about 10 minutes outside the boat house, as people take pictures with the apprehended reptile. The spectators note this new gator looks smaller than the previous gator. It becomes such a scene even the police officers who respond to the issue get some photos. All of the fun ends, when the gator actually gets temporary put in the back seat of a police vehicle.

A second video from the scene seems to question the legitimacy of whether or not the whole thing is real or some possible elaborate hoax. Both fisherman involved were said to be in police custody after the initial brouhaha settled down, and were brought in for further questioning with a potential belief that the gator was a pet who was could have been posed to look like it was captured in the lagoon.

Yes, it’s pretty out there to say the least.

Scroll down to view both.

Note there is some adult language in these videos.

Another alligator caught in the Humboldt Park lagoon just outside the Boathouse Café.