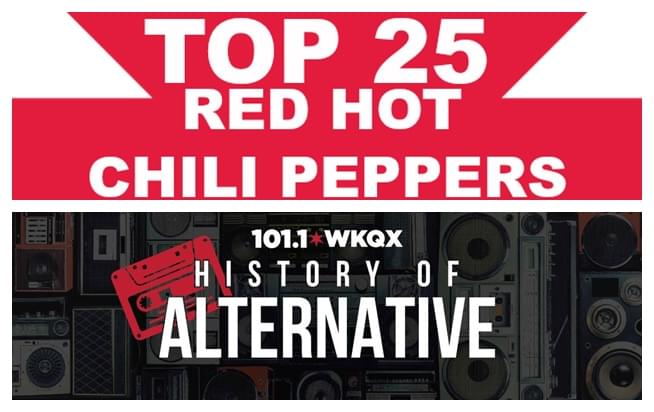 As the History of Alternative nears it’s end on-air this week on 101WKQX, we are looking back and reflecting. When you think of the bigges bands in atlerantive, the Red Hot Chili Peppers are certainly on the list with millions of albums sold, generations of fans, and a consistent reach to always push their musical boundries. They started out as high school friends who went on to form one of the most influential bands to ever come out of the West Coast.

So what are their best songs in their more than 30 years? With many different lineups and evoluitons, it was not easy and if you are a fan you will feel miffed by a track that is omitted. Its ok just reach out on social media and say what’s missing here.

This ‘By The Way’ deep cut has been theorized to be about the creative differences between members of the band. The song has chill yet trotting path while having this layered vocal by former guitarist Frusscante behind singer Anthony Kiedis. It was never a radio single, but it’s one of those songs that showed band’s wide range from fast to smooth.

This song is sort of self explanatory. If we were go more into it, I would get in trouble with my parents.

Good art whether it’s a painting, a movie, or a song should take you somewhere. This tale from ‘One Hot Minute’ does that with a nod to alternative icon Iggy Pop, a person whose dance moves you should emulate.

Off 1989’s ‘Mother’s Milk’ this song showed RHCP’s burgeoning maturity as they faced the death of guitarist and dear freind Hillel Slovak who died of an drug overdose. The song which references drug use, has been misconstrued as a an ‘anti-drug’ song is actually about letting your friend’s know when you need help. Objectively, it showed that the Peppers could be more than just a ‘party band’ and could have music with introspection while still rocking ahead.

Kiedis and company have crafted several alluring thrashers in tribute to sex. The hormones were on butt-twerking pogo jumping highs with this song which some is believed to be inspired by actress Traci Lords. Also Flea slays on this.

One of the most underrated lyrics in their catalog, this song sees Kiedis “calls for something in the air” to break from the everyday life , “throw me to wolves, because I know there’s order in the pack”. That’s daring. Who needs an office job when you got Flea and a tour bus adventure.

Anothony Kiedis has been public about his past battles with drug addiction and this song off ‘Calfironication’ speaks to that and how something you want so much is also the worst thing for you. The message resonated with many fans of the band and non-fans as the song reached number 1 on the Billboard Rock chart.

From 2011’s ‘I’m with You’, this circling rhythmic tornado of fun gets you clapping and singing along on every chorus. It also shows off how well then newly-minted guitarist Josh Klingoffer would slide into the band’s established dynamics with his own flair, that some will claim is ‘John Frusciante lite’ but really he has his own style that walks its own steps. The steps Klingoffer makes here are loose yet calculated to support to the song’s boa constrictor bass lines and Kiedis’s lyrics that demand the comprehension of your oddball surroundings.

This has be one of the best covers done by an alternative band. The song originally done by fellow Rock & Roll Hall of Famer Stevie Wonder, saw the band rev up the volume big time. It’s also been a signature part of their live shows ever since. Check out the sea of t-shirt helicopters in this video from Woodstock ’94. The original recorded cover appears on ‘Mother’s Milk’ and was one of the band’s first songs to received national radio attention.

15.THROW AWAY YOUR TELEVISiON

This dark tinged hip-wiggler off ‘By The Way’ plays off this tense progress to the point where you know it’s the soundtrack of you denying your doubt, walking up the girl to say what you feel or just telling off your boss when he has it coming. Now does it literally mean throw your away you flat-screen TV? Not really sure, but when it feels like my Netflix que is homework, maybe, just maybe that’s what this song can mean.

Ok, so RHCP has a lot of songs about life in California….a lot. It’s a go-to critique by many but you know what, the idea of California in that we are all seeking something bigger than ‘normal’, that’s a universal concept. On this boogie get down touches on that starstruck out-for-stardom journey off ‘Stadium Arcadium’ that so many going out West are after with a lush beat, groovy guitar lick, and a music video that sees unsuspecting hopefuls getting to play with the band in a surprise setting.

This epic emoter was originally recorded with intentions of including it on ‘Blodd Surgar Sex Magik’ in 1991 but for whatever reason, it did not make the cut. The song was included as a B-side on the ‘Give it Away’ single. It has grown to become one of the band’s most popular songs even though RHCP did not play it live until guitarist John Frusciante returned to the band in 1998 as he left the band before it was released.

It is not exactly clear what this ‘Califronication’ track is declaring, but it paints this omnipresent sense of something around all of us. Doing something internet digging, some fans say the song is a reference to the scientific theory of the multiverse or simply a word play on dreaming. No matter what your interpretation is Kiedis is behind the idea of people taking the lyrics in their own way.

The title track from their 2002 album shows a matured band that has not sacrificed an ounce of their funk muscle for a grasp of something gentle. You can hear some Beach Boys influence on the vocal harmonies, but the song is still dark talking about what’s going on with the people who are outside of the show who maybe want to be inside it or a part of it. That’s just my take.

Are you seeing a pattern here? The funkier, louder, and butt-shakier the song, I am in. It’s a sex jam for sexing all the sex….. Hormones and music make me not type good. if you are close to making out with a crush whose finally into you, this is could be your soundtrack for you.

The kids singing a long with the gang’s all here style chorus. It’s likely the best song that Dave Navarro contributed to during his short tenure as a Pep. It also has video that practically jumps off the screen with synchronized swimmers, glitters, and the little tykes dressed up like literal airplanes. (insert the “remember when MTV was ‘MTV’ memory here)

One of the best songs about the idea of friendship and how those relationships are just “soul brother sacred”. It comes from this specific time as RHCP is touring in the college rock scene and starting to get to close to the breakout part of their career, but there is an unintended sadness here in this love note to having buddies, it’s the lyrical kiss to Hillel Slovak, the band’s powerhouse guitarists who passed away in a drug overdose in 1988. That loss would influence a lot of the band’s development with ‘Mother’s Milk’ which was their first Gold selling album and the monstrous success in ‘Blood Surgar Sex Magik’.

Now enjoy RHCP goofing around and ‘playing’ this song in bowling lanes in a VHS transferred video. This is also pre-Chad Smith on drums, former Dead Kennedys drummer D.H. Peligro was on the kit then. No idea where this came from

The lead-off single from ‘Calfornication’ was a melodic reintroduction showing the band had been through a lot and were able to trudge along with John Frusciante back in the fold on guitar after a dangerous battle with addiction. It’s become the fifth most performed song on live shows since it was released in 1999.

This Led Zepplin inspired ballad features a risky yet successful departure on ‘BSSM’ with junkyard debris used for percussion, flute, and 12 string guitar which were all first for the band. The ‘Girl’ was recently reintroduced back into RHCP’s live set after being absent for the past 5 years.

The West coast does not just influence people to go to LA and lose themselves trying to find themselves. That is covered on ‘Tell Me Baby’ in another peel back off the proverbial California onion which seems to be the band’s creative center, comes this song that shows how this part of the world distorts the rest of the world. Sometimes it’s just what they want you to see and want you to be.  It’s also one of the band’s best music videos with a mix between ‘Requiem for a Dream’ sadness meets PlayStation 2 Tony Hawk.

The bass line on this rumbles through your body making instant adrenaline. If you need to wake up in the morning before you fly somewhere or travel, this is your jam. And it is a jam with a romping lyrical trek around the world (all pun intended) and this showed off RHCP’s epic return to alt mountain. It’s playful, sexual, and flirty while also being loud and outrageous with a sincere chorus of assurance. It sort of contains all of the definitive elements of the band’s overall sound. Bleached-blonde Also Kiedis is doing something a ghost in the video…..

This track off 2002’s ‘By The Way’ shows Anthony Kiedis’s keen sense to write lyrics off a rhythm then the standard pattern of writing lyrics the other way around. Here the one-time child actor-turned-alt rock singer speaks to cultivating positive energy in oneself, even if you may have lost of sight of it. You can picture yourself chugging along on the treadmill trying to work off that Polish sausage with this in your head.

This hit song from ‘BSSM’ that held a spot on the Billboard Hot 100 for twenty six consecutive weeks after it’s release, speaks to the loneliness and sadness of drug use with Kiedis referencing his own bottom. It’s hard to say if Kiedis has written a song more poignant in that it speaks to his very personal and specific challenges with addiction while also giving the listener a look at their own problems. That is a hard duality that is sustained by the song’s soaring energy.